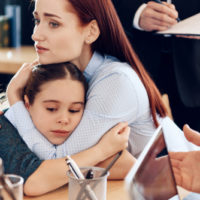 The process of removing a child from the home following allegations of abuse or neglect is traumatic for both the child and the parent. Dependency is the process used to remove a child from the home, and place them under the authority of government when the child’s safety or health is perceived to be at risk. This situation is serious, and can result in the termination of the parent’s rights over the child. Consequently, when dependency proceedings are initiated, even if the child is not physically removed from the home at the outset, parents should contact an attorney familiar with these cases to ensure their interests are fully represented at all stages.

Because children are involved and cannot adequately advocate on their own behalves, a team of advocates is assigned this responsibility to protect the child’s best interests. While the agenda of these advocates does not always match what the child wants or needs, they do play an integral part in dependency cases, and their functions need to be understood. Changes to this system may be on the horizon, though, as the Florida Constitution Revision Commission is currently considering making it a right for children in dependency proceedings to receive a court-appointed private attorney. This change could affect the dynamics of how the child advocate interacts with the court. A discussion of the roles played by the present system of advocates in dependency cases will follow below.

A GAL is a court-appointed volunteer designated to look out for the child’s best interests, but is not a legal advocate. While there are no specific qualifications to be a GAL, these individuals are specially trained on how to assess and advocate for a child alleged to have suffered from abuse or neglect. They are principally directed to conduct an investigation of the circumstances surrounding the dependency case, including interviewing family, friends, neighbors and others with relevant information. In addition, they help to facilitate a coordination of resources for the child and family, so the child’s needs are sufficiently met. Importantly, GALs report to the court on their recommendation for the child’s short- and long- term interests, and monitor whether the court orders and plans issued by the Department of Children and Families (DCF – the agency who manages dependency cases) are being followed. This last point is important, because a negative report to the judge can directly affect the court’s decision on the progression of a dependency case.

GAL attorneys are pro bono, or free, legal advocates who represent the wishes of the child. They are representatives of the GAL organization, and as such, do not have an attorney/client relationship with the child, but rather represent the child’s best interests. This means that the GAL attorney is supposed to tell the court about issues the child may want kept from court or the parents if withholding this information is not in the child’s interests. This arrangement would change under the proposed constitutional change, and the appointed attorney in that case would be bound to follow the directions of the child. These attorneys also take charge of the legal process required to proceed in dependency cases.

Finally, case managers are representatives from DCF that help to formulate, implement and monitor case plans that outline what a parent must do for reunification to occur or to be released from DCF supervision. Compliance with a case plan, as perceived by the case manager, is an essential part of the dependency process, and is a key matter to discuss with a dependency attorney.

Dependency proceedings are scary situations, and you need an advocate on your side to protect your rights as a parent and the integrity of your family. Joyce A. Julian understands how immediate and sensitive these matters are, and will do everything possible to keep you and your child together. Contact our Fort Lauderdale law firm for a free consultation.