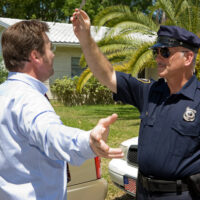 Driving under the influence (DUI) charges in Florida are serious and the penalties are severe. Along with jail time, suspension of your driver’s license, and harsh fines, a DUI can remain on your permanent record throughout your life.  If you, a friend, or a family member were arrested or charged with a DUI, contact an experienced DUI attorney to understand your rights.

If law enforcement stops a motorist with a suspicion of driving under the influence of drugs or alcohol, a police officer has the right to carry out a series of preliminary roadside tests that are called field sobriety tests. These tests were established by the National Highway Traffic Safety Administration (NHTSA) as a way to attempt to determine if motorists are impaired or under the influence of drugs or alcohol while driving.

Law enforcement must have the consent of the driver in order to administer these tests. No driver in the state of Florida is under any requirement to take these field sobriety tests or a breathalyzer test. While breathalyzer tests attempt to determine if a person’s blood alcohol concentration is above 0.08 percent, the physical field sobriety tests are used by police officers to make a subjective decision in the field whether or not a driver is too impaired to drive.

The three standard types of field sobriety tests are as follows:

The true issue at hand is whether the subjective nature of the field sobriety tests truly determines if a person is impaired enough to be arrested and charged with a DUI. Ultimately, a field sobriety test is only as accurate as the police officers that administer them, and the conditions surrounding the test.  Accuracy issues can include the location, surrounding traffic, lighting, noise, age of the motorist, the weight of motorist, medical conditions of the motorist,  weather, possible language barriers, how the instructions were issued, and if the police officer evaluated the test properly.

Right to Refuse a Field Sobriety Test in Florida

You have a legal right in the state of Florida to refuse to take the administered field sobriety tests from law enforcement. Unfortunately, In most cases, if a police officer has already stopped a vehicle and motorist for suspicion of driving under the influence, there is a good chance that they will then make an arrest for a DUI based on behavior.  The police officer does have the right to arrest a person and take them to a police station for suspicion of drunk driving or driving under the influence of drugs.

Let Us Help You Today

If you are unsure how your field sobriety test, or your refusal to take one, will affect your case, contact an experienced DUI attorney as soon as possible to help you understand your legal rights. You need an experienced Fort Lauderdale criminal lawyer who is dedicated and committed to your case. Contact the criminal defense lawyers at the office of Joyce A. Julian, P.A. today at 954-467-6656 or online for a free consultation.