What Happens If The Chain Of Custody Is Broken? 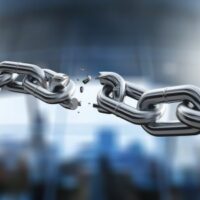 In a criminal case, evidence may include, among many other things, photographs, DNA samples, bodily fluids, such as blood, documents, and personal property. If law enforcement officers make a mistake when handling evidence, a “chain of custody error” is said to have occurred. The chain of custody is the documentation and proper care of the evidence. The chain of custody is the documentation of, among many other things, parties who collected, handled, or analyzed a piece of evidence during an investigation. A record of the chain of evidence must be maintained and established in court whenever evidence is being presented. Otherwise, the evidence may be deemed inadmissible in court.

What Happens if the Chain of Custody Is Broken?

So, what happens if the chain of custody is broken? If the chain of custody is broken, evidence may be suppressed or deemed inadmissible. For example, suppose you got involved in a car accident and then had your blood drawn so the police could see if you were drunk driving. In such a case, if the blood evidence was mislabeled or mixed up with other blood samples in the lab, it may be suppressed.

Evidence can also be thrown out of court if it;

It is crucial to note that the police also break the chain of custody if they lose evidence.

When evidence is deemed “inadmissible” or “suppressed”, it means that it cannot be used against a defendant by being presented to a jury, or even considered by the judge. If the judge refuses to admit evidence because of a chain of a custody error, the prosecutor might be left with little or no solid evidence to use against you. If it is a crucial piece of evidence, your criminal case might be dismissed, or you could end up with reduced charges. An experienced criminal attorney can identify these weak points in the prosecution’s case, and ensure that you get the best possible outcome.

Challenging the Chain of Custody

Indeed, it can be hard to prove a total breakdown of the chain of custody. However, it is not difficult to cast doubt upon whether or not the chain of custody was broken or improperly maintained. Remember, the prosecutor is required to prove your guilt beyond a reasonable doubt. If they cannot do that, then you cannot be convicted.

Navigating the complex area of chain of custody requires the expertise of a criminal defense lawyer. A Fort Lauderdale criminal attorney at Joyce A. Julian, P.A., can help you dispute the credibility of the evidence that the prosecutor is trying to use against you. Contact 954-467-6656 today to schedule a consultation.